The student is asked to read ‘Notes on the Gallery Space’ by Brian O’Doherty and then make notes regarding the essay.

The modern version of the white cube was first formalised and the rules set by Alfred Barr in the New York MoMA when Barr presented the exhibition “Cubism and Abstract Art” in 1936. Previously to this point, the principle of removing distractions from the viewer and presenting images in a neutral background had been explored by the Third Reich in the 1930s’. The Third Reich’s idea was to remove everything which could clutter the view and use white as a symbol of purity. This principle was reformed outside of the Third Reich with the idea that it reflected the contemporary ideas of the Bauhaus style.

By creating a white cube it becomes a neutral space, where the viewer stands outside of time, outside of space. The viewer is separated from the current world and placed in an empty space where there is nothing but the art. By closing off windows, removing the colour from the walls and hiding the lighting, the art and the viewer are placed together. This allows the artist, curator, dealer and exhibitor to control the content within the space, by changing the context within which the art is presented. In doing so it changes the relationship between the viewer and the subject by blurring the boundaries, allowing the space within the cube itself to become art, by not merely containing the art buy by being part of it.

Prior to the development of the White Cube principles, art was displayed in a Salon style, where paintings were hung in any available space and the viewer had to pick and choose between the cacophony of images. Gallery salon walls became crowded places as collections grew. O’Doherty used the example of Samuel F.B.Morses’ ‘Gallery of the Louvre’ as an example of the crowded, less reverential gallery. 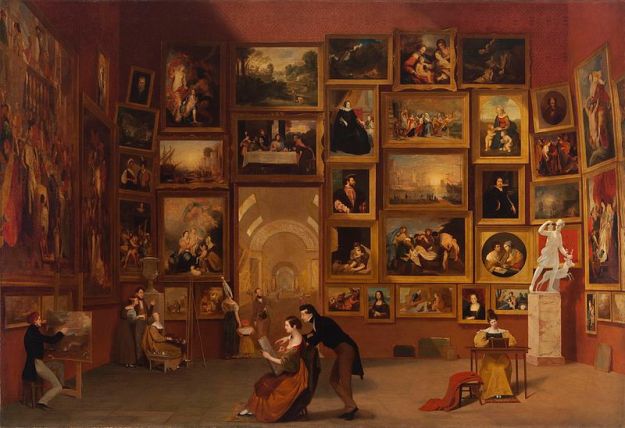 O’Doherty is correct in stating that the scene within Morse’s painting would be ‘upsetting to the modern eye’. Within the scene, I find it difficult to differentiate between the images. They seem to arranged randomly as if to fit within any available space. Much like the 16th Century Mural paintings of Duso and Battista Dossi, the paintings become wallpaper, although unlike Dossis ‘Camera delle Cariatide’ it is not a single image, the wall is instead just a device for hanging the art on, rather than contributing to the art.

By removing any abstract distractions from the viewer, including too much information, the gallery became a reverential space, much in the vein of a religious space; quiet, introspective, a space to think without the influences of the outside world. Unlike the Salon space which was bustling with people who had come to see the works, the white space started to become a more exclusive domain.

The perception that you had to know something about the art on display became the norm because most of the contextual information was removed, as it was seen to interrupt the space. In doing so the white cube became the locale of the knowledgeable and the educated rather than the gallery as a salon where it was a crowded, more egalitarian gathering.

The white cube reinstated the wall as something more than where a picture was hung, it broke the boundary of the frame; in a salon space, the image is a self-contained entity, quarantined from its neighbour. In breaking the boundary, for example, when William C. Seitz removed the frames from the Monet’s at his MoMA show in 1960, it allowed the viewer to see the scene beyond the frame, in essence almost a return to the image as a mural.

Within the isolation of the white space, without the heavy frame, the image and the art were less restricted, as was the eye of the viewer. It allowed the viewer to look beyond the image without the loss of perspective. The white wall aesthetic also allows each image space within which to exist without overlapping into the next image. In the codified parlance of the white space, each individual piece of art is given a space to breathe.

The white cube aesthetic has sometimes been comfortably combined with a salon exhibition. At the National Gallery of Art in Edinburgh, the Rembrandt exhibition was topped and tailed with a white cube; a projected introduction by the curator which contained a potted history of Rembrandt and an explanation of the layout of the exhibition. The viewer was then allowed to proceed to a salon-style exhibition, where images with heavy frames were hung on a green wall. The images although close together were placed in such a way that the viewer did not have to crouch or stretch their neck to see the images, as they were hung in a line rather than crammed together. Only in the case of Belshazzar’s Feast, was the viewer confronted by a Salon type scenario, where the image was placed between the two openings to another room, completely filling the space. 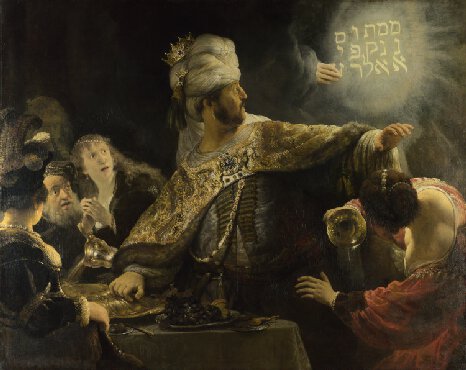 The exhibition ended in another white cube, in which modern images inspired by Rembrandt had been hung. Personally, the space was too small and ineffectually displayed the images as they were crammed together ironically salon style.

Certainly, one of the issues to come out of the gallery as a white cube is where to store the images which are not on display and which ones should be shown and how. This developed the curator into a manager, collector and designer. The curator juggles the collection and manages the throughput of the art in association with the exhibitor and the artist.

The National Gallery also exhibited a number of Toulouse Lautrec prints within another part of the gallery. The prints hung, high on the wall, in the brightly light space, the white rooms, at time corridor-like, shuffling the viewer from print to print, before ending in a chamber where the paintings of Lautrec were finally displayed. Due to the shape of the galley, it was at times quite crowded and noisy.

Some exhibitions are hampered by trying to be too much of a communal art space, the City Art Centre in Edinburgh, exhibits modern images within the white cube aesthetic, but it does not always pull it off. In its Robert Blomfield exhibition of photographs of 1950s-1970s Edinburgh, the room met the aesthetics of the white cube’ white walls, hidden lighting, polished floor and images placed around the rooms in light frames. The exhibition guided the viewer through the exhibition with a small stop to view a projected interview with Blomfield as he described and discussed the photographs he had taken. In contrast to this was the Scottish photography exhibition which was downstairs at the City Art Centre. There the room did not meet the aesthetics. Although it was a white space, the room was dark and poorly light, the floor was uneven, and the images crowded together in a horizontal line. The room used for the exhibition was dual purpose, with a child’s play space in the middle, which meant the room was not quiet and contemplative.

Both the salon aesthetic and the white cube aesthetic have a valid space within the gallery. In the scene of a modern space, to present a modern take on art, it has come into its own, especially with the concepts of installations and room art. While it may have lost a little of its religious, revenant aspect, the quiet contemplative space in which to view art without distraction and allow the viewer to commune with the art itself is still present.

From a personal point of view, the white cube is both heaven and hell. With uniform lighting, I do not have to fight with highlight and shadow to see an image. The colours will be the same day in day out. The downside, of course, is that with limited vision, I cannot read or see the details of the image thus excluding me from the experience.

O’Doherty, B., 1986. Notes on the Gallery Space. Inside the White Cube: The Ideology of the Gallery Space, [Online]. First Edition, 7-32. Available at: http://arts.berkeley.edu/wp-content/uploads/2016/01/arc-of-life-ODoherty_Brian_Inside_the_White_Cube_The_Ideology_of_the_Gallery_Space.pdf [Accessed 4 June 2019].

Garage. 2019. Inside the White Cube: The Ideology of the Gallery Space. [ONLINE] Available at: https://garagemca.org/en/publishing/brian-o-doherty-inside-the-white-cube-the-ideology-of-the-gallery-space. [Accessed 13 June 2019].