This Assignment is to write a critical essay on a subject encountered so far during this course. I have chosen New Topographics and the influence of the New Topographics group on Landscape Photography.

The New Topographic group changed the way in which the landscape was photographed and viewed by the use of minimalism and breaking away from the scenic view of western art and incorporating expressionist and conceptual art ideologies as well as environmental issues and messages.

The concept of the untamed sublime landscape of the American West was hatched long before Carlton Watkins and Timothy O’Sullivan photographed “pristine” landscapes during their Journeys with the US Geological Survey. Painters such as Asher B. Durand and William James Stillman painted sublime wildernesses such as Katterskill Clove, 1866, June Shower, 1854 and Study of Upper Saranac Lake, 1854.

This idea of an unspoiled wilderness was reinforced by Ansel Adams with images such as Dunes, Oceano, California, c.1963

The images produced by the New Topographics group, however, flew in the face of that idea to challenge the myth of the American Dream and the untouched landscape.

The New Topographics group, made up of photographers such as Lewis Baltz, Hilla and Bernd Becher, and Robert Adams, challenged the ideology of Lady Liberty and the Manifest Destiny, these photographers, possibly influenced by the themes of Alienation, loss and the Superficiality of Society in J.D Salinger’s ‘Catcher in the Rye’, wanted to show that in post WWII America, Manifest Destiny had thrown off her Red handkerchief headscarf, dropped her blue boiler suit and joined the naked “Free” generation of peace, love, and LSD. The failure of American might in Vietnam was reflected in the failure of the American dream. The expansion of society into the open areas of the states had resulted in literally castles built on sand, which was the result of the bust following the post-WWII boom.

The New Topographics group explored the concepts of the New America, one where the failure of the dream had to be accepted and that identity is created not from one’s uniqueness but from one’s connection to others through commonality.

While Robert Adams photographed the tract houses sitting alone in the desert, the houses waiting for some form of further development to be built around them, he showed the finality of a ‘man created landscape’ without condemning those who had tried to build on these ‘new’ frontiers.

By selecting these scenes Adams incorporated the view of a stagnant movement; the second grand mass movement of people from the East Coast through to the undeveloped lands of the Midwest, Arizona, and Utah has run out of money and steam, leaving the front runners to watch as the land slowly reclaimed what they had tried to build their future on.

Lewis Blatz reformulated the Film and Television view of the Wild West frontier town with ‘Park City’. Here instead of tract housing rotting in a desert, Baltz captured the slow march of the building of a Prime holiday Resort amongst the dry and snow-capped hills of Utah; Only by looking at the quality of the buildings can you see that they are going up rather than coming down. Baltz showed that here the boom generation had seen a landscape that was profit ready for development and change.

Between Adams and Baltz the two faces of America are portrayed, rich and poor, boom and bust. Both reflecting on human control on the environment and the power of money within the continuing American dream, by avoiding any ideas of romanticism and artistic beauty they were able to document unemotionally the way in which man has come to alter nature.

Hilla and Bernd Becher who are most well-known for ‘Pitheads, 1974’ took a different approach with their images,

excluding people from their industrial collections, their collected images demonstrated a Linnaean approach to their subjects; Categorising them and by showing these selections together, creating a taxonomy of industrial architecture, which addressed the idea of form and function and how the industrial landscape was formed through man-made developments.

Certainly, in the case of the Becher’s, the landscapes challenged the perceived aesthetics of Landscape photography. Their methods were based on a fixed set of rules, image format, uniform light, uniform distance, consistent composition and consistent restriction to the monochromatic range, as set by Ansel Adams, equates to precise uniformity of the image. By staying firmly within the boundaries of Topography, the Becher’s have avoided introducing other factors such as historical values or set location boundaries. In examining the images, we can see that the Becher’s have returned their subjects to a similar form of art, that of the icon. Like the Becher’s images, religious icons were simple small portraits which were hung together within churches. Like the Becher’s pitheads, these religious icons had a constant set of guiding rules when they were painted. Becher’s subjects grouped together have a flow as the eye moves from one subject to another, consciously looking for differences in the beginning before the eye resets and we see the overlooked beauty in the formation of the subjects. But unlike the religious icons, Hilla and Bernd Becher’s images such as Loomis Coal Breaker, Wilkes-Barre, Pennsylvania, USA (1974) show no hope, only despair as the subject lies doomed, defunct and dying.

The New Topographics group concentrated on the American West, the advertised land of the empty country, roamed by cattle and the Marlboro Man, a country where at the time of the mass development of the land, the road trip had become commonplace. Idealised by Dennis Hopper in Easy Rider and Jack Kerouac’s ‘On the Road’ the road trip became a marker between the last of the frontier land exploration and the foreshadowing reality of the recession and the collapse of the subprime mortgage bubble. This landscape of motels, fuelling stations, garages and small towns, scattered across the grasslands and deserts were photographed by John Schott, and Frank Gohlke. Schott in is work ‘Route 66 Hotels’ shows a landscape filled with Whitewashed Adobe buildings, neon signs, and empty plastic chairs. Concrete tepees with high thin Tv aerials and air conditioners bolted to the sides, sit clustered together, hideaways from the sun and the open road.

Schott photographs these buildings so that they can be identified and cataloged as part of a taxonomic group of roadside life. His dispassionate framing of the subject so that it can be viewed almost as if one was passing them in a car, possibly tired from the journey at ready to pick the next random stop.

Strangely, the scenes produced by Schott and Gohlke would reappear as an influence on others; for example, in the design, structure, layout, and buildings of the fictional town of Radiator Springs in the Disney Movie ‘Cars’. Instead of Schott’s concrete Tepees, there is instead a row of concrete traffic cones.

Gohlke in his series Grain Elevators, gave differing views of the structures, unlike the Bechers, Gohlke took his photographs from different distances and angles, capturing the structures in a static state. For the majority there no people in Gohlke’s images, shadows fall across vehicles and ground alike. Only in ‘Grain Elevators being repaired, Minneapolis 1974’ do we have people, 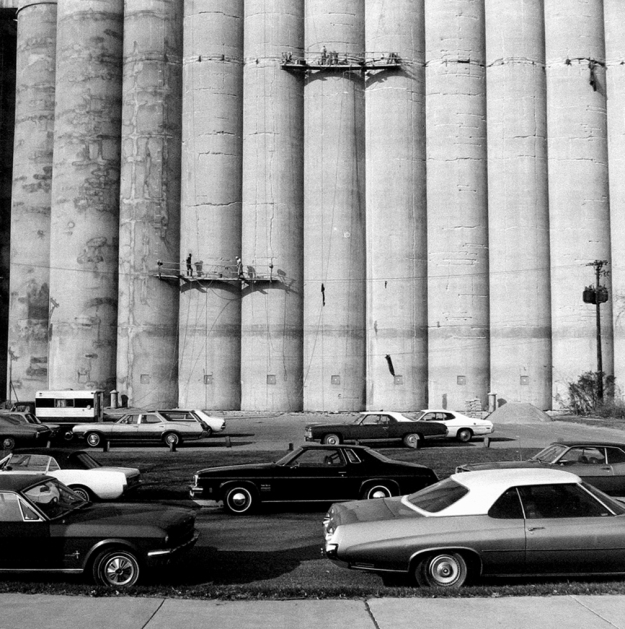 but the figures are tiny against the vast structure, they are the faceless workers, only there to restore the grain elevator to its former state. His photo ‘Landscape St. Paul 1974’ predicts the rise of the out of town shopping mall. 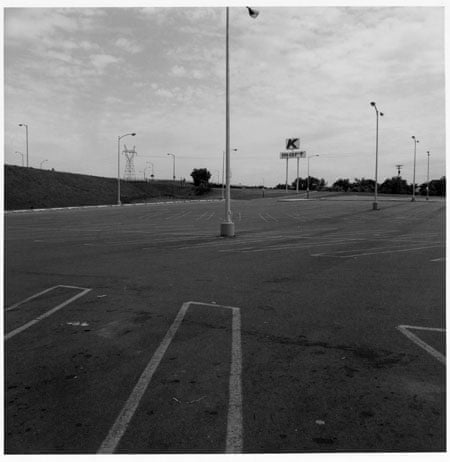 This later work by Gohlke ties into one of the main influences to come out of the New Topographics group, which is the impact of man-made change to the environment and the issues being caused as a result of climate change. Change which has happened mainly due to mass consumerism in the West but also due to the changes in farming techniques and the expanding change of land use for housing due to population growth.

From these works, it can be seen that the New Topographics groups were amongst the first to use art as a tool for political agitation. The groups’ work can also be seen as using Landscape photography to perform cultural criticism, examining the dichotomy of the need for more land whilst trying to save the environment.

The New Topographics group turned landscape photography and landscape art on its head; by focussing on what most people passed by, ignored or just did not examine, they changed the perspective on looking at the landscape as well as how the landscape is viewed as a tool and a source.