In this exercise. We are instructed to read Simon Morleys Essay ‘Staring into the contemporary abyss’, so that we can have an overview of the sublime within visual culture.

http://www.tate.org.uk/context-comment/articles/staring-contemporary-abyss
We are then asked to choose a body of work that best explores the sublime and then write a least 300 words on how the chosen work relates to the sublime.

I wanted to avoid any of the works mentioned in my previous entry on the sublime, so using the initial image of Albert Speer’s ‘Light Dome’(1937) from Morley’s essay. I reviewed a number of images from the Nuremberg Rally all of which originate from the Nazi Propaganda film “Festliches Nürnberg”

I decided to use the sequence of Images from ‘Cathedral of Light’ a short essay on the rare photographs website about the rally.

In the early eighteenth century Joseph Addison described the notion of the sublime as something that ‘fills the mind with an agreeable kind of horror’. Edmond Burke went further describing the sublime using terms like ‘vastness’ and ‘terror’ as opposed to ‘balance’, ‘colour’ and ‘smoothness’ for beauty. These terms describe the sublime as an aesthetic form which makes the viewer or reader feel off balance and pushed into an uncomfortable feeling.

The images within ‘Cathedral of light’ do just that. They go straight to the pit of the stomach and pull making the viewer feel both overawed and horrified at the same time.

Albert Speer was the architect for the Third Reich and using the power of film and television, he designed and built their vision of the future in these rallies. His design for this rally in 1937 consisted of 130 search lights pointed skyward to create a series of columns, these columns not only reached far into the sky but could be seen for miles around. Their message was that the Third Reich was not only so powerful that it could turn night into day but that they had to power to reach into heaven itself. They served as a back light and a wall behind Hitler where he would be displayed in a mystical and ceremonial way. 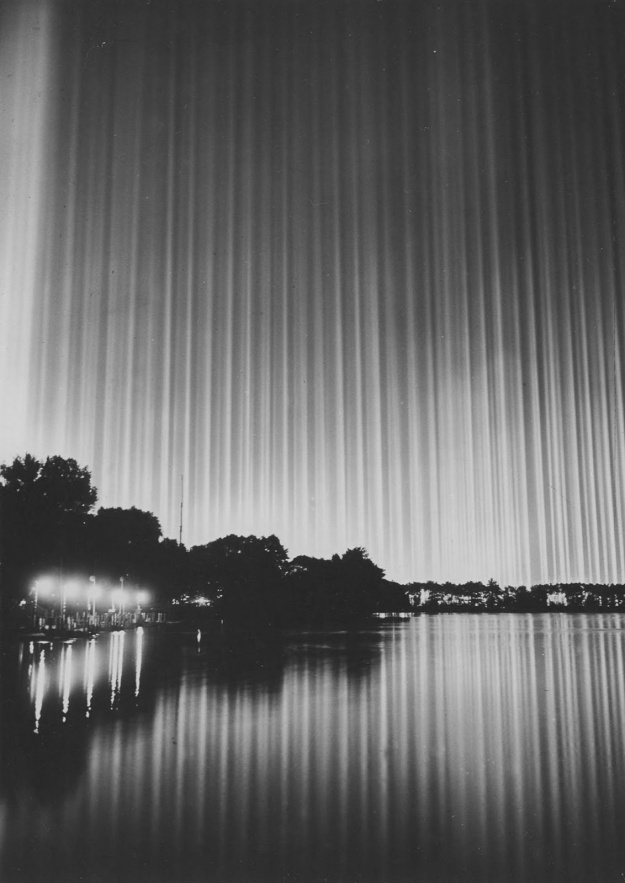 Each image demonstrates Speer’s design, which demonstrates the subtle way that Speer used Architecture, Technology and Art as a way of showing how the sublime could be used as a powerful tool by an authoritarian state.

Speer pulled lights away from the Luftwaffe just for this ceremony, these lights would later be used in wartime where they would spear an aircraft in their column and point the anti aircraft guns at the craft. When this happened it almost certainly signed the death warrant for the aircrew aboard the plane.

The lights here however show that the sublime was used to impress the audience with a show of power and mysticism. This use of power through art makes the viewer uncomfortable not only because of the subject of the images (Nazis) but the way in which the images push the viewer onto the back foot through use of Landscape as a power.