After reading the assignment requirements, I first selected a few ideas and jotted them down. After examining a few ideas, I decided to take a journey down part of Edinburgh’s Royal Mile, the intention to examine how the city buildings themselves though they are ever present have pushed back into virtual Edgelands. I planned on doing this by journeying down the single street looking at the how the the yearly festival is changing the perception by visiting the changes in social structure, photographing how the changes made  its effect on history and the value given to the landscape by visitors and locals alike.

While preparing for this; I made a short plan of the journey, the journey was to move from the top of the royal mile, just outside the castle esplanade, down to the Tron building which at one point was one of the main historical boundaries of the city.

Due to the ongoing degradation of sight in my left eye and now the presence of a vestigial cataract in my right eye, along with my mobility issues, it was decided that I should undertake the journey in a wheelchair, mainly due to the concerns of my partner that in such a busy location that I may be knocked over.

Reluctantly I undertook the journey in the wheelchair and it upon three main issues.

After examining the photos, I have decided that I would upload them and publish them to my learning log as it was an idea which ultimately failed as I made up my mind that the idea did not work. 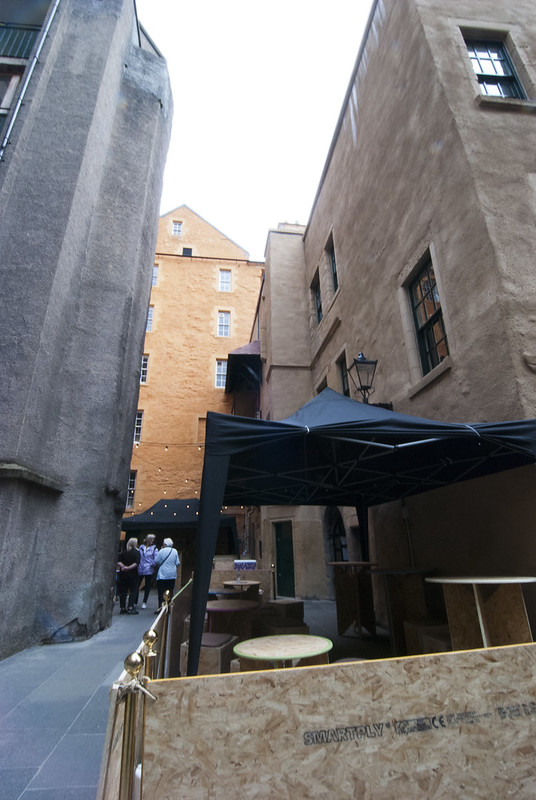 Here a historical yard area called a close, has been sectioned off so that an outside entertainmeant area could be created. 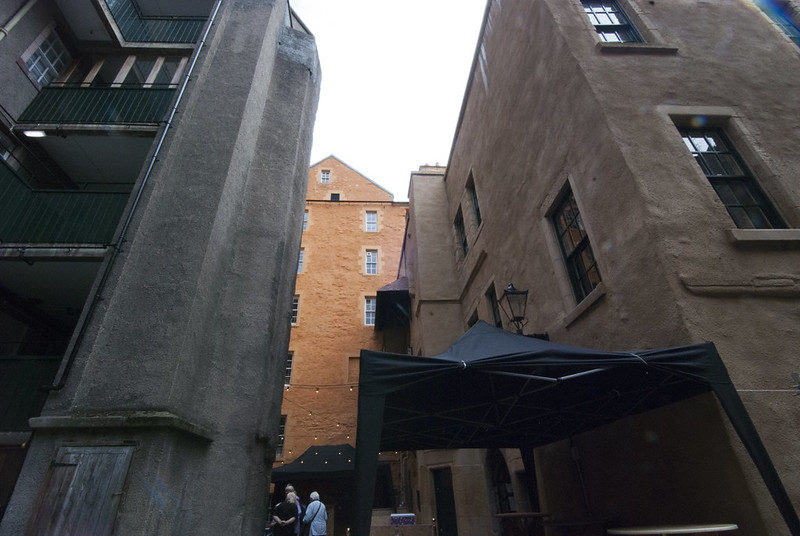 Royal Mile Close – entertainment for some.

Here it can be seen that the original buildings have been ignored so that the small courtyard can be converted and sectioned off. 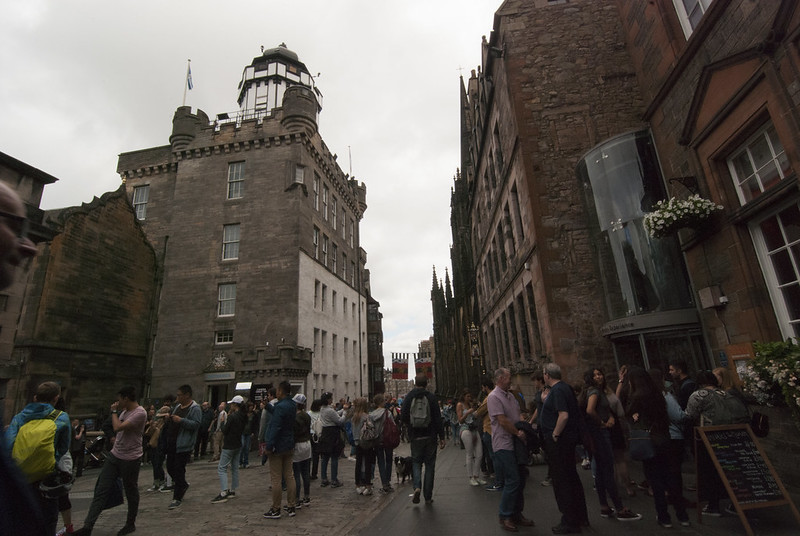 At the top of the Royal Mile sits the camera obscura which has been on this site since 1835. Many people walk passed it thinking that it is nothing more than the first gift shop in the shopping gauntlet which is the Royal Mile. 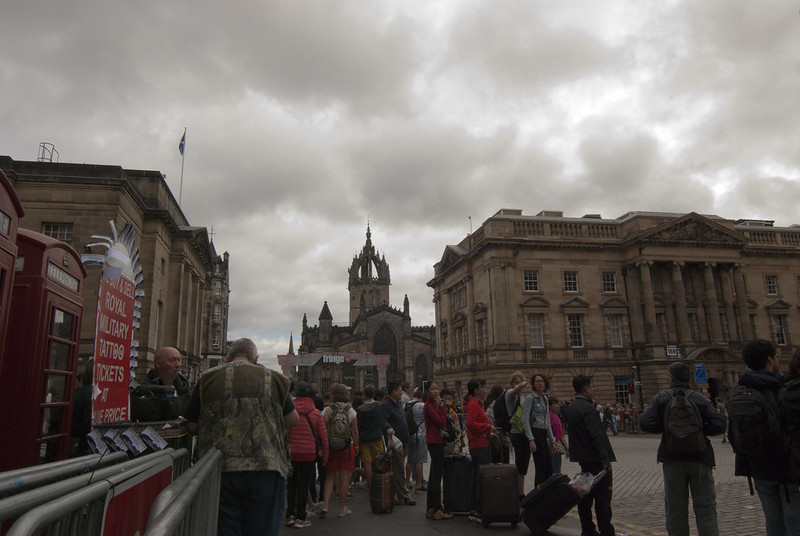 At the first main junction down the Royal Mile, you cross over the mound, and continue heading down the old town. In between the court buildings can be seen the gates to the performance area; a section of road closed to all traffic so that public performances can be made and shows can be touted or leafleted to the passing public. 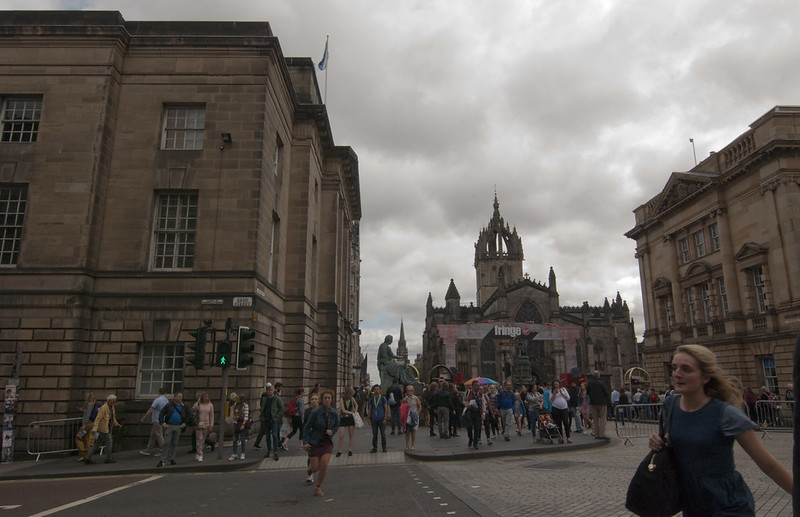 The only smooth crossing.

Heading through the crowded junction, we cross the actual mound road. This is only one of two smooth crossings for wheelchair users in the whole of the street. Between people, poor road surface and barriers, the crossings become crowded and at the green crossing signal, it is everyone for themselves. 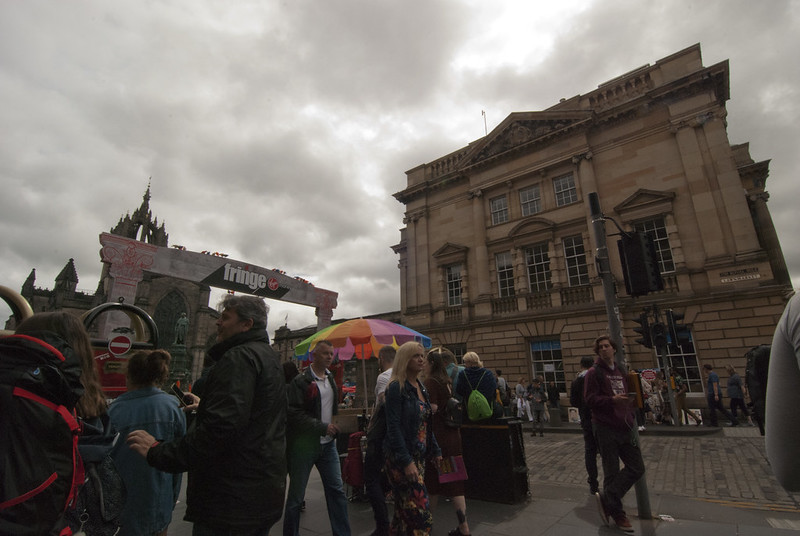 Here compressed between two anti terrorist gates, we squeeze further down the street. Here be performers, leaflets and buskers. 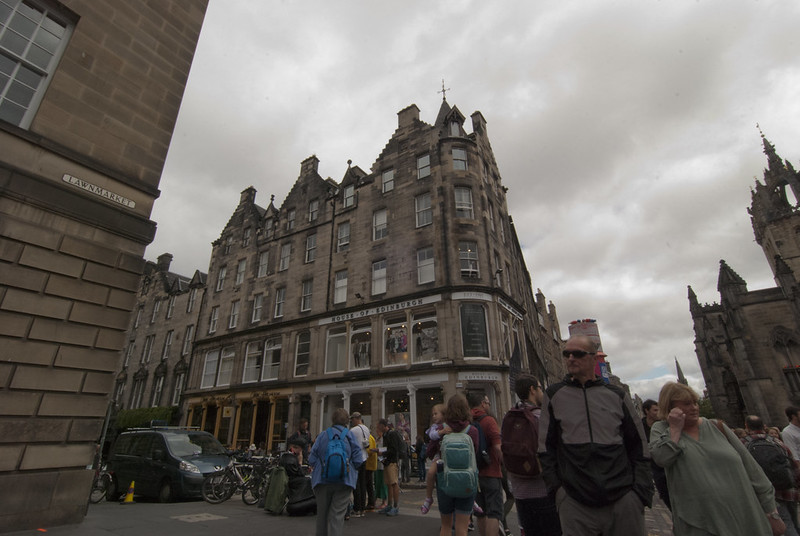 A man sits dressed as a chess piece challenging passing tourists to a game of chess. Very few look up to see the buildings that surround them. 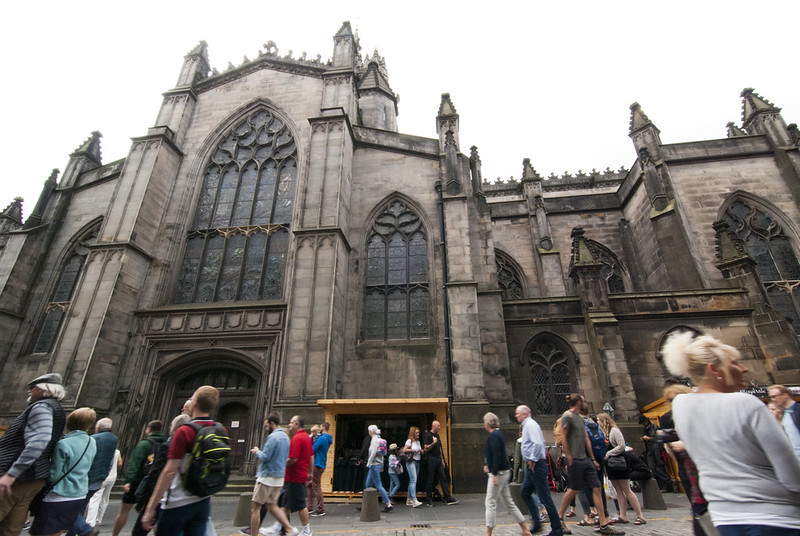 The Cathedral is surrounded, all 4 sides have been given over to commerce and entertainment. Inside hang flags from many historical battles, outside is has been decorated with coloured plastic pigeons. 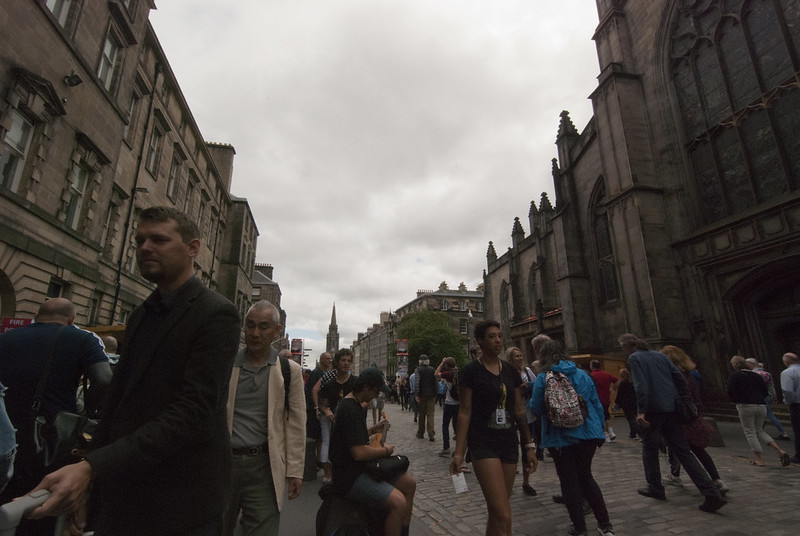 As we passed the crowded pavement at the Cathedral, we passed a large number of people handing out leaflets for their shows at the fringe and festival. Every single person handed a leaflet over the top of my head to my partner.  The journey had soured for me; having been bounced, bashed, sworn at, pushed aside and now ignored, I lost all focus and inspiration for the journey. 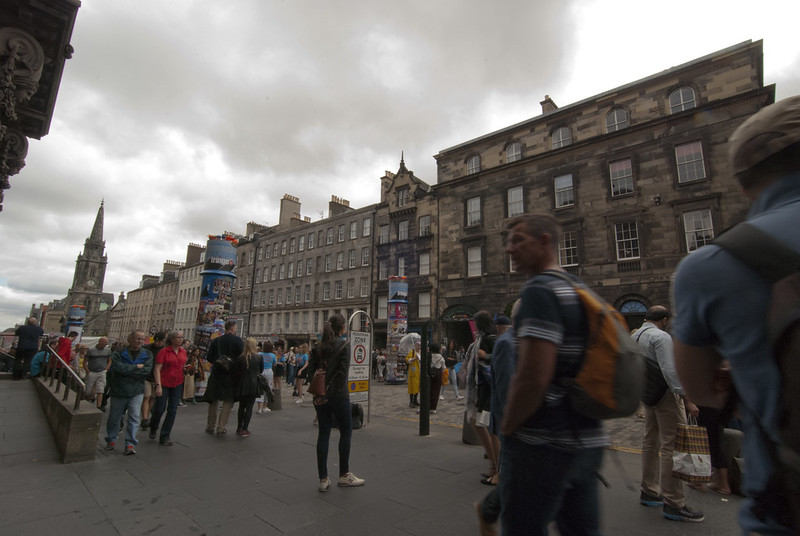 Here we stopped the journey, we were within site of the destination, the Tron church, but I was disheartened and depressed at the journey. What should have been fun turned sour at the lack of the milk of human kindness.

While the idea of a journey was being conveyed I felt that there was little to no landscape or cityscape available and that the part of the city I was journeying through were repeating themselves. While buildings could be seen to be passing, the perceived lack of interaction with the buildings of visitors could not be discerned due to the amount of people and the difficulty in obtaining clear and concise images.

I feel that the images did not gel and the concept was flawed in its design. I shall go back to the drawing board and work out what to do now.